We are a behavioral and systems neuroscience laboratory investigating the neuronal basis of fear memory, depression and anxiety. We utilize various anatomical, electrophysiological, and behavioral techniques in rodents to study the specific neuronal subcircuits and differential functions of several basal forebrain nuclei, the bed nucleus of the stria terminalis (BNST), suprachiasmatic nucleus (SCN), amygdala and hippocampus in the aforementioned cognitive-affective processes. We are particularly interested in understanding how physiological (e.g. circadian rhythms) or social alterations relate to limbic networks underlying acute and chronic forms of fear. We run a number of projects in parallel, all contributing to our understanding of how fear memory and related stress-response is processed in the brain.

In collaboration with Prof. Satish Nair’s team at the University of Missouri, we are working on modeling the role of these basal forebrain GABAergic projections on the generation of local theta oscillations in the amygdala. As demonstrated in the hippocampus, we postulate that basal forebrain GABAergic projections to the amygdala is a key contributor to thetagenesis in this region. This is tested by adapting the biophysical hippocampal theta generation model by Hummos and Nair (2017) to the basolateral amygdala. This model incorporates thalamic, cortical, and basal forebrain projections together with basic types of amygdala interneuron and known local synaptic connections.

Normal human hearing range is between 20Hz and 20kHz and we cannot hear sounds which fall outside this range. Rodents, on the other hand, can hear and make vocalizations beyond 20kHz frequency. These vocalizations are called Ultrasonic Vocalizations (USVs). They are used for intraspecies communication and reflect the acute affective state of rodents. Rats emit 50kHz vocalizations when they display appetitive behavior and produce bursts of 22kHz USVs under an aversive state. As such, 22kHz vocalizations function as an alarm call for danger. Rodents make these calls when they sense the odor of a natural predator, and it is suggested that 22kHz vocalizations are homologous to human crying.

While humans cannot hear these vocalizations, they can be recorded and visualized with special equipment. In our lab, we record and analyze ultrasonic vocalizations of rats following or during manipulations that alter their affective state. These include positive manipulations such as environmental enrichment as well as different types of stress paradigms, such social isolation. We use a custom-made recorder which can capture frequencies up to 120kHz and use Matlab™ for analysis.

Our goal is to better monitor the affective state of the rats as well as understanding the nature of these vocalizations. We also use artificial USVs to modulate behavior. For instance, a train of 22kHz pulses from an artificial source can decrease mobility while 50kHz emissions can elicit approaching behavior. We have designed a novel paradigm where a robot and a rat interacts in a Skinner box, in which the robot, by means of machine learning, acquires how to manipulate the behavior of the rat. The robot does this by observing the rat’s behavior and accordingly choosing to present a rewards or a punishment. We utilize USVs both as an input and an output for the robot. As input, they help the robot in understanding the affective state of the rat. As output, artificial USVs are used to modulate the rat’s behavior.

Bright light therapy, also known as phototherapy, is used to treat different types of depression, especially major depressive disorder with seasonal pattern (i.e. seasonal affective disorder). In line with this growing body of research and clinical applications, our laboratory showed that a single 12-hour exposure to light during the dark phase of a 12h Light - 12h Dark cycle has a substantial ameliorative effect on behavioral despair in rats. Ongoing research aims to discover the parameters of photic stimulation that will optimize the antidepressant effect of light.

The Effects of Environmental Enrichment on Mood and Cognition 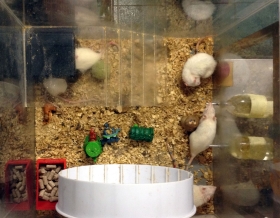 Rodent environmental enrichment (EE), initially conceptualized by Donald Hebb (1947, 1949) as a manipulation to boost problem solving skills and enhance hippocampal learning, is a frequently applied procedure in behavioral neuroscience. The ameliorative properties of EE on age-related cognitive decline as well as numerous neurodegenerative and neurodevelopmental disorders have been studied in detail. Application of this widely utilized procedure on animal stress models, in contrast, has produced conflicting results: it is still not clear if EE has depressant or antidepressant effects. Similarly, while some EE applications produced anxiogenic effects, others, however, have led to anxiolytic outcomes.

We aim to reveal specific conditions that underlie the antidepressant and anxiolytic properties of EE. We test differential effects of varying lengths of EE on stress response mechanisms, anxiety-like behavior, behavioral despair, and various types of memory in rats. We have recently discovered that a 3-day-long enrichment after chronic social isolation produces anxiolytic effects without altering prefrontal cortex-dependent working memory. We revealed increased behavioral despair in rats exposed to this brief EE following long-term social isolation, compared to no EE, socially-isolated controls.

We complement this behavioral data with immunohistochemistry for cFos, the protein product of an immediate early gene indicating recent neuronal activity. We employ immunofluorescence staining for detecting hippocampal neurogenesis following injections of BrdU (Bromodeoxyuridine / 5-bromo-2'-deoxyuridine), a thymidine analog. We are currently applying novel designs to further understand the differential effects of EE on behavioral, cognitive, and affective domains after stress induction.

Of Rats and Robots: A Mutual Learning Paradigm

We are working on a novel learning paradigm by combining operant conditioning with various knowledge extraction and machine learning models. We call it “mutual learning” emerging in a rat-robot interaction. The proof-of-concept study utilizes an operant conditioning chamber (i.e. a Skinner’s box), an adult male wild-type Wistar rat and a humanoid robot (NAO). The rat and the robot interact with each other to achieve particular goals, modifying their own actions based on signals/cues of the partner: the rat learns from the robot while the robot learns from the rat. The resulting computational framework will offer a platform to test the efficacy of different types of learning models in interactive environments, and develop a virtually optimum operant conditioning training/reinforcement schedule.

We place the rat and the robot in a chamber with a food dispenser (violet square). The reward for the robot is having the rat around in the so called robot zone (red square), while receiving a bait from the dispenser is the natural motivation of the rat. The robot can present two signals. The “good signal” rewards the rat by providing food if the rat enters the robot zone. The “bad signal” provides no reward no matter what the rat does. The rat learns these as in a typical operant conditioning paradigm. The robot does not know what its signals do and must figure them out by observing the behaviors of the rat. With the good signal, the rat first needs to approach to the robot and then move to the dispenser to receive its treat. As such, the good signal brings the rat to the robot, rewarding the robot.

We are simulating this paradigm in a custom-made virtual world, where two artificial agents interact with each other in an environment modeling our real-world experiments. In the depicted 10x10 grid simulation model, the rat starts from the bottom left corner, heads for the robot zone and then goes to the dispenser. The signs in each grid represent the best action according to the virtual rat in that cell. The intensity shows how strong the best action is. Arrows signify moving towards the pointed cell, 0 means waiting is the best option (or the virtual rat has never been there), and “Y” stands for consummatory response (i.e. eating the bait). 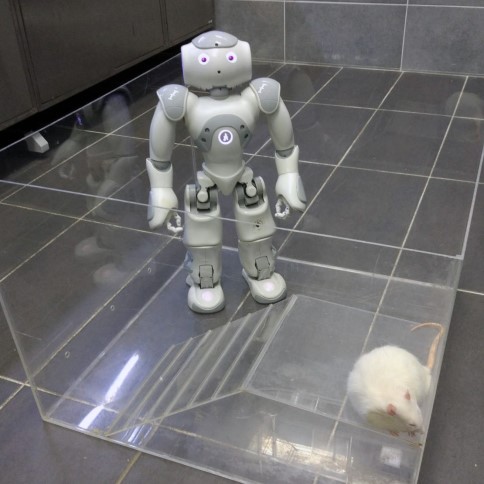 Social bonding decreases psychological (di)stress levels, whether it is acute or chronic (i.e. anxiety). This positive impact is known as social buffering. Stress has versatile physiological and behavioral effects; whose underlying neuronal correlates are difficult to decipher under naturalistic designs. Utilizing a controlled environmental setup with rats, we examine the ameliorative effects of social buffering following acute restraint stress. We hypothesize that company of a conspecific (vs. being alone) leads to higher exploratory and risk-taking behavior as measured in the Multivariate Concentric Square Field, but no change in anxiety levels assessed by the Elevated Plus Maze. We combine ultrasonic vocalization recordings, behavioral testing and immunohistochemistry for the immediate early gene protein c-Fos, to pinpoint some of the limbic correlates of social buffering.

Ketamine, a dissociative non-competitive N-methyl-D-aspartate receptor (NMDAR) antagonist, has mainly been used as a general anesthetic for children. Its antidepressant properties were discovered recently, placing ketamine as a potent atypical antidepressant drug with a great potential. One of the first animal studies investigating the antidepressant effects of ketamine was published in our laboratory, revealing that a single anesthetic dose of ketamine (160 mg/kg, IP) has a prolonged ameliorative effect on behavioral despair in rats (Yilmaz et al., 2002). Pilot clinical studies on ketamine showed that the drug has promising ameliorative effects on a number of depressive symptoms, including suicidal thoughts. With a growing body of both animal studies and clinical trials, this anesthetic substance now emerges as a proper antidepressant, especially for those who cannot benefit from traditional forms of treatment. Nasal sprays of ketamine have now been approved by the FDA for adults with treatment-resistant depression.

We are now searching for the optimum antidepressant effect of ketamine by fine-tuning the drug dose, administration methods, and supra-additive effects with other antidepressants. We recently designed a sub-chronic voluntary oral administration paradigm and tested the animals in the forced swim test and a simple spatial working memory paradigm. We found an ameliorative effect at very low doses (0.4 mg/kg) with no differential effect on spatial working memory (Ecevitoglu et al., 2019). We are currently testing cocktail drugs with ketamine and other NMDAR antagonists to enhance drug efficacy while minimizing cognitive side effects.